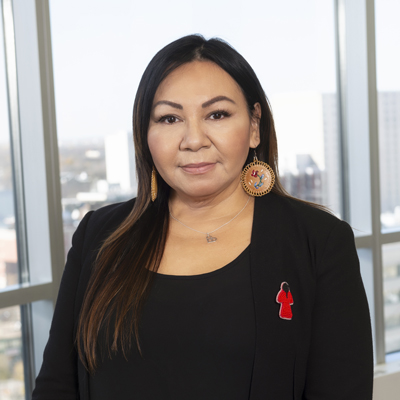 This email address is being protected from spambots. You need JavaScript enabled to view it.

Sheila North known as a “bridge builder”, is a member of Bunibonibee Cree Nation and was elected as Grand Chief of Manitoba Keewatinowi Okimakanak (MKO) in September 2015. Previous to this, she enjoyed a career as the Chief Communication Officer at Assembly for Manitoba Chiefs, a CBC journalist and CTV correspondent, an economic development officer, a radio personality and a Cree translator. Sheila holds a diploma in Business Accounting and Rural Development with a focus on community development, a certificate in radio and television broadcasting and a diploma in Creative Communications.

Sheila is passionate about the issue of missing and murdered Indigenous women (MMIW). With this in mind, she created the hashtag, #MMIW which is now commonly used on social media. She continues to work closely with families, friends, as well as Indigenous and non- Indigenous leaders to advance the political will to address racism and the issues around violence against Indigenous people. Over the past couple of years, Sheila has co-produced with Leonard Yakir, a TV documentary “1200+, part-1 highlighting some of the systemic issues that place Indigenous women at greater risk for violence and sexual exploitation.

Finally, Sheila is a gifted writer, a Radio Television Digital News Association award winner and Gemini Award nominee. In 2015, Sheila was featured in Chatelaine Magazine as one of the 'Top 30 Women of 2015 and by media personality Ace Burpee from Virgin Radio as one of the 'Most Fascinating 100 Manitobans to Watch.